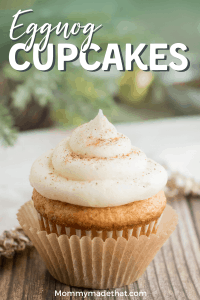 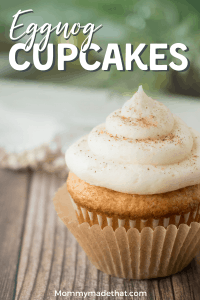 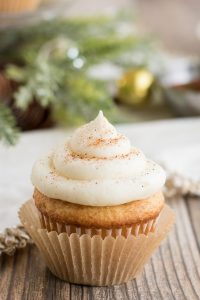 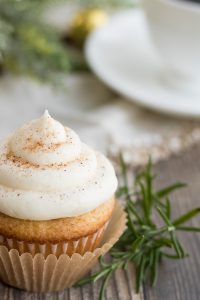 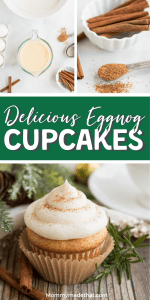 These eggnog cupcakes are a festive and delicious way to celebrate the holidays. They are moist and yummy, and oh so classy. 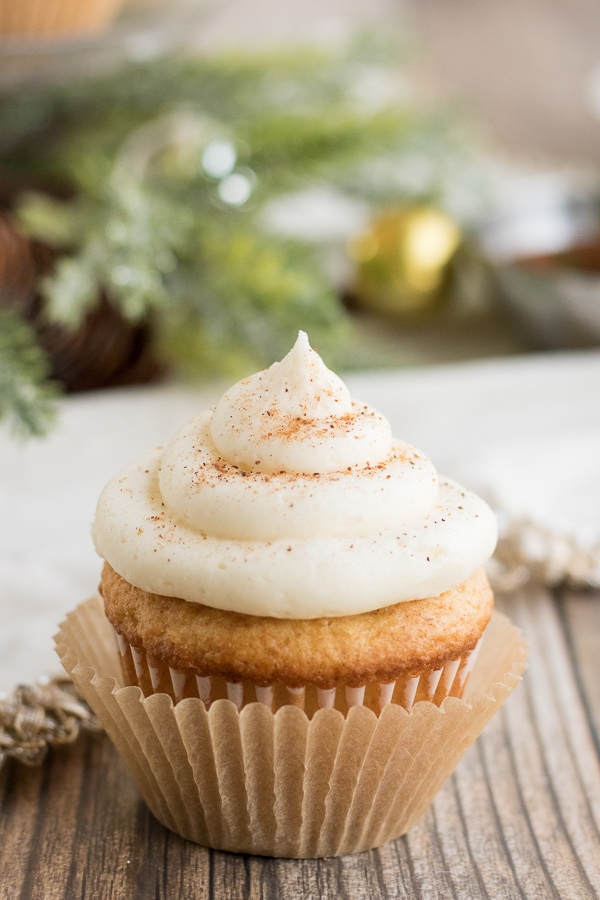 After whipping up a large batch of our favorite homemade eggnog recipe (ours is alcohol-free) we decided to try out a few other fun eggnog recipes.

One of which is eggnog cupcakes!

And of course, an eggnog buttercream icing to top off the cupcakes.

These cupcakes are made from scratch and are so yummy!

They have a festive, yet subtle eggnog spice flavor.

We also have an alternative recipe at the bottom if you’re in a hurry and want to make these cupcakes with cake mix instead of from scratch.

After all, we know how busy the holiday season is! 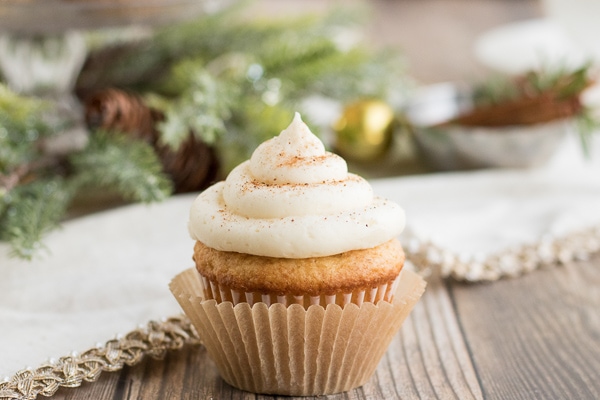 For this recipe, we need to split the supplies list into two separate sections.

The eggnog cupcakes and the eggnog buttercream. 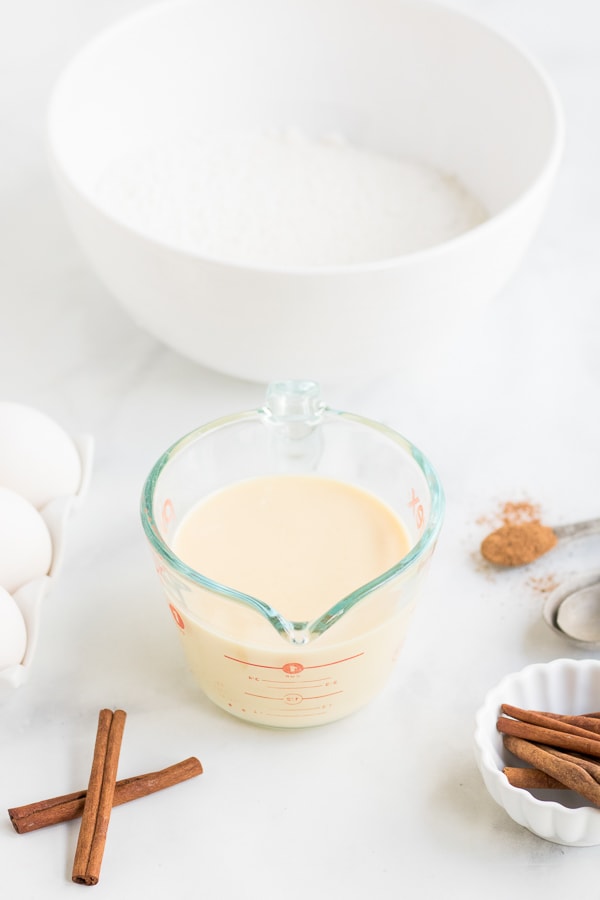 How to Make Eggnog Cupcakes

You should get about 24 eggnog cupcakes out of this recipe.

Start by preheating the oven to 350 degrees and lining a cupcake pan with paper or silicone liners.

Start by whipping your eggs in a large bowl and set aside to use later.

In a small mixing bowl, combine the flour, baking powder, salt, cinnamon and nutmeg, and then set aside.

In a separate bowl, beat together the butter and vanilla extract until smooth and creamy. 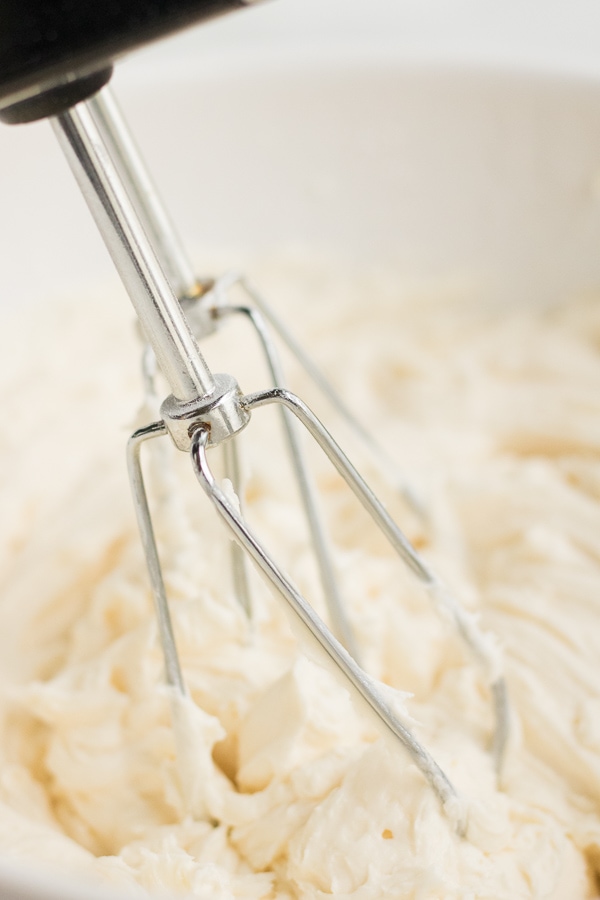 Next, add the sugar and vegetable oil and beat well until fully combined.

Measure out your 1 cup of eggnog into a pourable measuring cup and set aside.

Next, alternate adding the flour mixture and the eggnog to your butter mixture and mixing with the electric mixer on medium speed.

Try to start and end with the flour mixture. 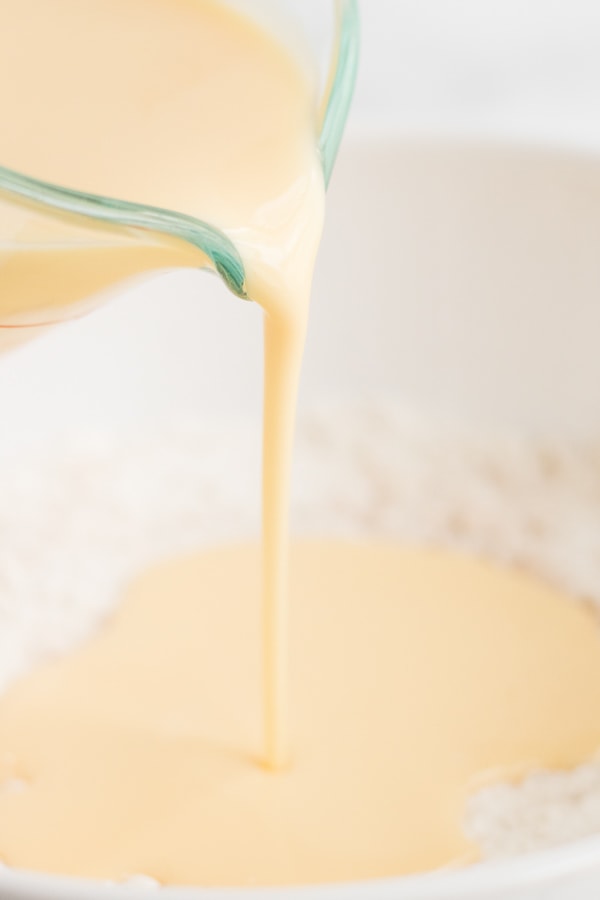 Make sure to stir each ingredient in until each one is almost completely combined before adding the other.

Finally, add in the whipped eggs to your eggnog cupcake batter until it’s all well combined.

Fill your cupcake liners ¾ full so they are ready to bake. 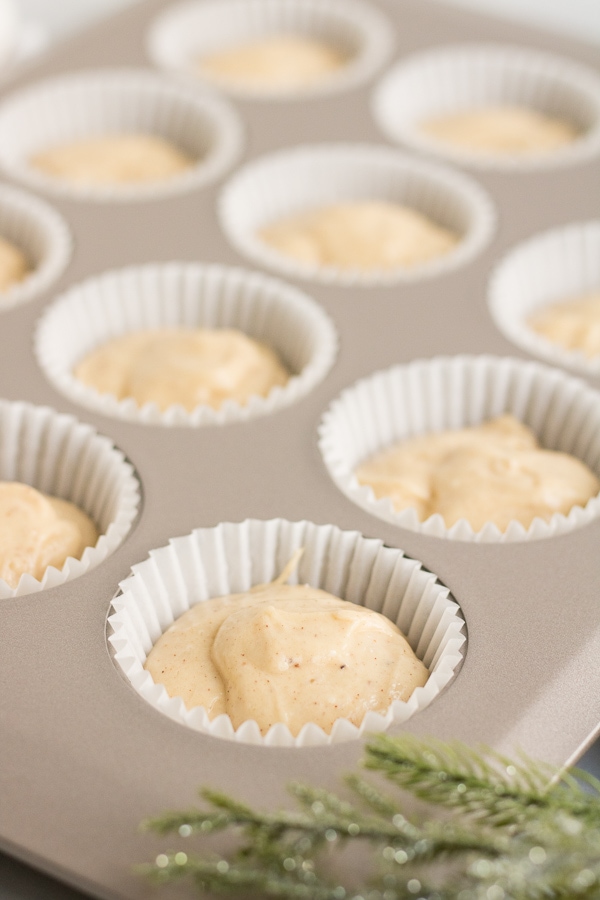 Bake your eggnog cupcake batter for 18-20 minutes, until the tops are golden brown and a tooth pick comes out clean.

How to Make Eggnog Icing

Now that your cupcakes are baking, it’s time to whip up a batch of eggnog icing!

We are using a basic buttercream frosting recipe, but subbing eggnog for the milk.

To make the icing, start by beating the butter with an electric mixer until creamy.

Add salt, cinnamon and nutmeg to the buttercream and mix well.

Gradually add powdered sugar ½ cup at a time until each cup is completely mixed.

Next, add in the eggnog one tablespoon at a time and mix on medium speed. 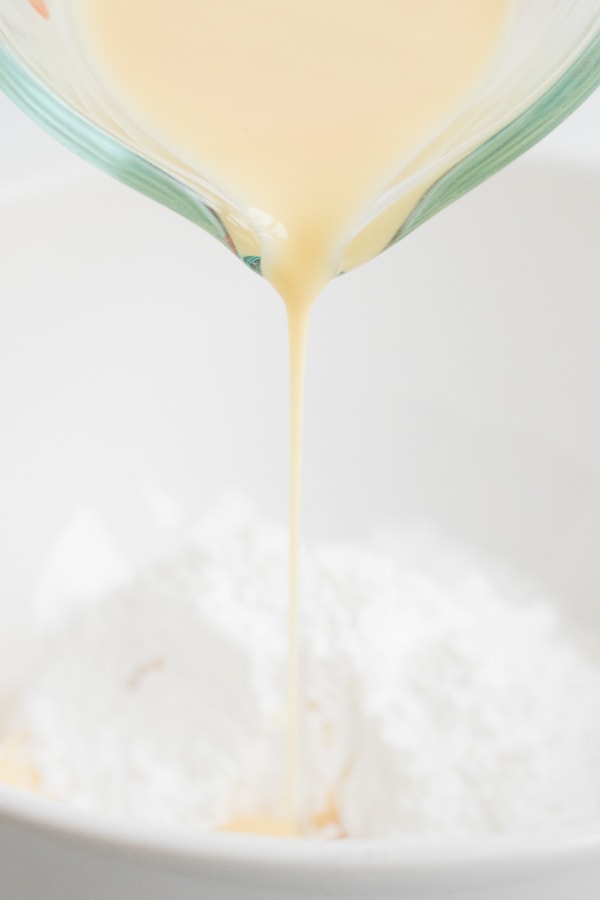 Once all of the ingredients are mixed well, increase the speed to high and beat vigorously for 1 minute.

And your eggnog frosting is finished!

To get them to look extra pretty, place your frosting into a piping bag and pipe the icing onto the cupcakes. 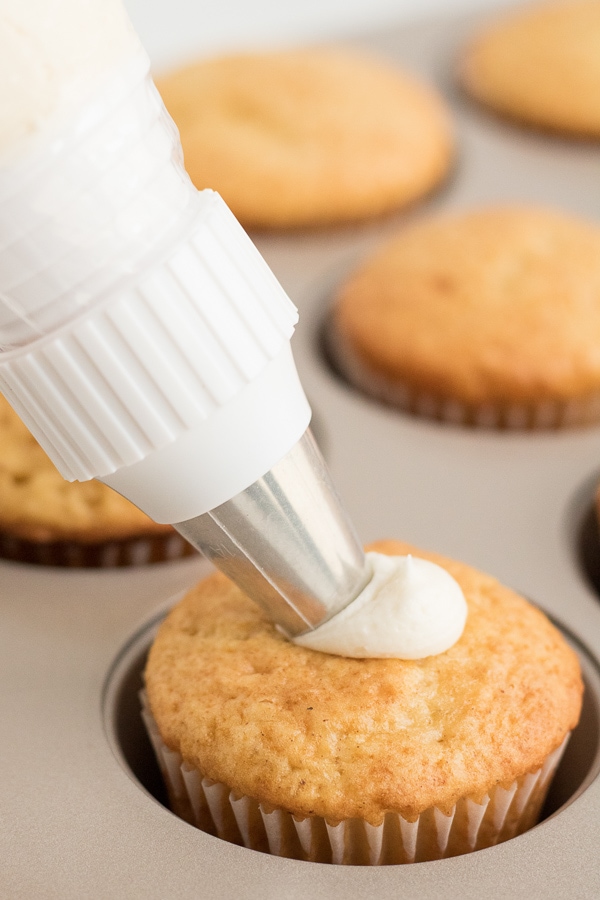 Finally, top of your scrumptious eggnog cupcakes with a light dusting of nutmeg.

So pretty. So festive. So fun! 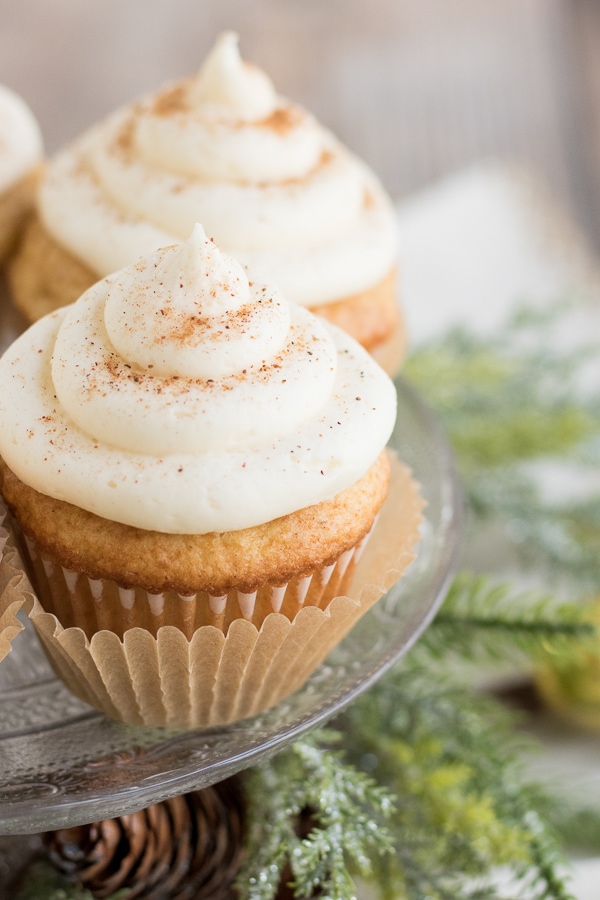 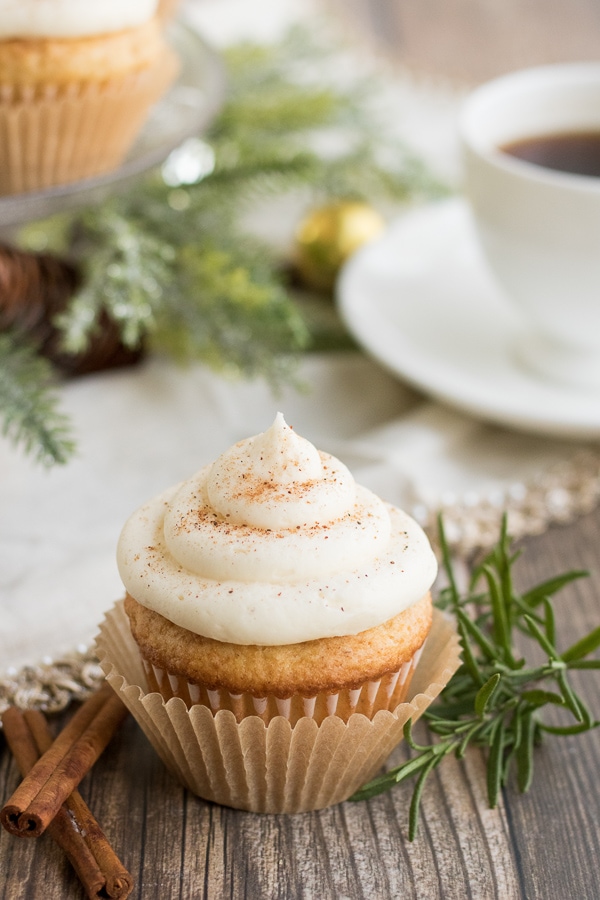 How to Make Eggnog Cupcakes from Boxed Cake Mix

How to Make Eggnog Cupcakes from Cake Mix

Start by preheating the oven to 350 degrees. Line your cupcake pan with your favorite liners and set aside.

In a small mixing bowl toss the cake mix, cinnamon and nutmeg together, breaking up any large clumps.

In a large mixing bowl, mix the vegetable oil, eggs and eggnog together.

Slowly add in the cake mix mixture on low speed until completely incorporated, should be about 30 seconds.

Turn up the speed on the electric mixer and blend an additional 1-2 minutes.

Fill your cupcake liners 1/2 full and bake for 18-20 minutes until golden brown.

Finish off your cupcakes with the eggnog buttercream frosting above and sprinkle with the nutmeg for decoration. 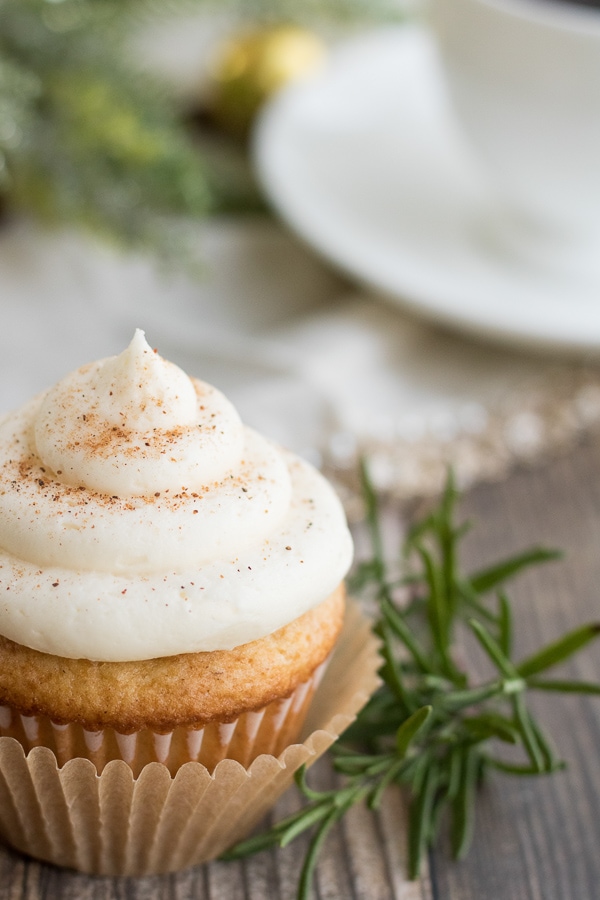 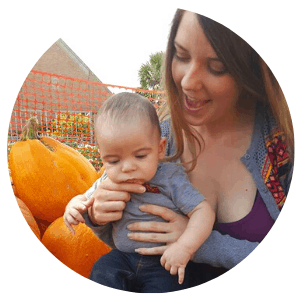 Hi there! I’m Stormy. Here at Mommy Made That you’ll find lots of fun crafty ideas of things to make and recipe to try. We hope you have fun finding a few things to inspire you own creativity!

As an Amazon Associate I earn from qualifying purchases.